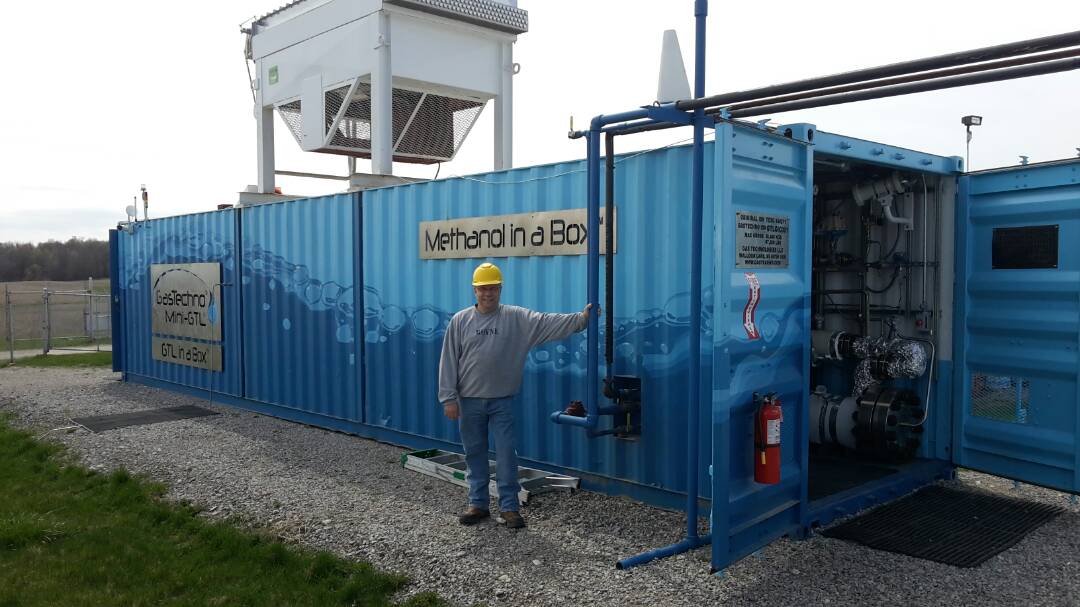 GEF’s modular Mini-GTL® plants and its proprietary pre-treatment RNG system will be deployed at stranded gas landfills and dairy farms to produce low-to-negative carbon intensity renewable liquid fuels from biogas on-site. The Mini-GTL® 300 plant is designed to process biogas flows of 200-700 standard cubic feet per minute (scfm) to produce up to 3,000 gallons per day (gpd) renewable methanol-ethanol while the Mini-GTL® 750 processes 400-1500 scfm to produce over 2 million gallons per year of these renewable fuels. The modular Mini-GTL plants are contained in 45-foot shipping containers, ideal for rapid deployment at space-constrained biogas sites. These plants will be manufactured at GasTechno’s new Michigan facility to serve biogas projects worldwide.

“We had a resurgence in investor support during 2021-2022 allowing us to build out the latest Mini-GTL® 300 and Mini-GTL® 750 plant designs and, given ongoing global supply chain challenges, we concluded that it would be best for GEF to manufacture its own plants in-house versus outsourcing. We plan to manufacture at least one Mini-GTL® 750 plant per month at our Michigan facility to allow deployment of twelve or more turn-key biogas-to-methanol renewable fuel projects in 2023-2024. GEF offers the lowest production cost solution to our partners,” according to Walter Breidenstein, the CEO.

GEF is completing final steps in preparation for a merger with a SPAC or public corporation with the objective to capture a dominant position in the rapidly growing renewable fuel and chemical sectors. The company has developed financial forecasts based on delivering turn-key EPC projects (build, own, operate, transfer-BOOT) to customers complete with a take-or-pay off-take agreement for renewable fuels backed by an insurance guarantee. The base forecast assumes construction of twenty-seven (27) Mini-GTL® plants and affiliated GasTechno Energy Centers located across Michigan, California, Texas and New York over 10 years. Energy Centers will supply low-to-negative carbon intensity renewable fuels such as hydrogen, DME, diesel, jet fuel and include electric fast-charging stations to serve the medium-duty truck and semi-truck markets. On-site power generated from renewable methanol at Energy Centers will provide the lowest carbon intensity EV fast charging system compared to traditional grid and RNG connected EV charging competitors.

GEF targets to reach $3 billion to $5 billion in annual revenue within 7 years based on the projected spike in low carbon fuel demand as the US pursues aggressive decarbonization in the transportation sector supported by recently passed legislation including the Inflation Reduction Act. In addition to the twenty-seven planned Energy Centers, GEF will license and sell turn-key Mini-GTL® systems to large renewable energy developers, corporations and government sponsors seeking to produce low carbon renewable fuels and chemicals.

During Q4 2022, GEF will initiate interviews with a short list of SPACs and public corporations seeking a merger combination in the low carbon fuels sector and anticipates reaching agreed terms by year-end. GEF is represented by Winston & Strawn, Houston and Kilpatrick Townsend, Washington, DC.

We use cookies on our website to give you the most relevant experience by remembering your preferences and repeat visits. By clicking “Accept All”, you consent to the use of ALL the cookies. However, you may visit "Cookie Settings" to provide a controlled consent.
Cookie SettingsAccept All
Manage consent

This website uses cookies to improve your experience while you navigate through the website. Out of these, the cookies that are categorized as necessary are stored on your browser as they are essential for the working of basic functionalities of the website. We also use third-party cookies that help us analyze and understand how you use this website. These cookies will be stored in your browser only with your consent. You also have the option to opt-out of these cookies. But opting out of some of these cookies may affect your browsing experience.
Necessary Always Enabled
Necessary cookies are absolutely essential for the website to function properly. These cookies ensure basic functionalities and security features of the website, anonymously.
Functional
Functional cookies help to perform certain functionalities like sharing the content of the website on social media platforms, collect feedbacks, and other third-party features.
Performance
Performance cookies are used to understand and analyze the key performance indexes of the website which helps in delivering a better user experience for the visitors.
Analytics
Analytical cookies are used to understand how visitors interact with the website. These cookies help provide information on metrics the number of visitors, bounce rate, traffic source, etc.
Advertisement
Advertisement cookies are used to provide visitors with relevant ads and marketing campaigns. These cookies track visitors across websites and collect information to provide customized ads.
Others
Other uncategorized cookies are those that are being analyzed and have not been classified into a category as yet.
SAVE & ACCEPT